JEZEBEL SPIRIT is the spirit of the Anti-Christ!

Jezebel Spirit is the force behind most Satanic attack to God's people. It will weaken your relationship to God and will seduce you to love the world. You will become fleshly and materialism you will love. The love of money and the things of this world!

The world today which is ruled by a False Religious Empire who deceives many and make men bow and worship idols is one of the major agent who is being inhabited by Jezebel spirit. Beware of the Illuminati Jesuits, they are the most evil men who are used by this spirit. The Jezebel's spirit!


The JEZEBEL SPIRIT and her satanic agenda in 2017 is like no year we have ever seen before. The end times are here and the devil, the antichrist spirit, and illuminati are deceiving men and women all over the world through the use of this demonic spirit, witchcraft and the media. With fashion week in New York happening now, many people are being manipulated by this nasty wicked spirit of lust and seduction! 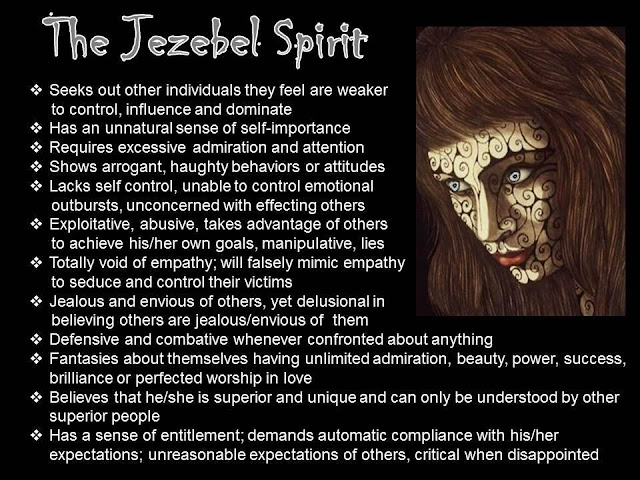 BEWARE OF JW CULT BEFORE ITS TOO LATE!

Beware the Cult-Like Control and Abuse of Jehovah’s Witnesses

Discourage individualism, encourage group-think
One of Jehovah’s Witnesses can be disfellowshipped (excommunicated) for believing or teaching anything other than their official doctrine (Shepherd the Flock of God book). 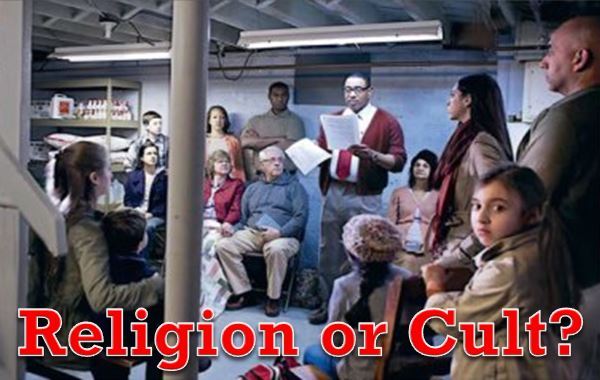 The May 8 2003 Awake magazine included an article titled, “Does Christian Unity Require Uniformity?” The article mentioned that Christians were and are allowed to make individual choices about many matters, but also stated, “… loyal Christians would not insist on their personal rights to the detriment of the consciences of others or at the expense of congregation unity. Nor should they claim freedom of action to do something clearly forbidden by God’s Word. (Romans 15:1; 2 Peter 2:1, 19) Love for God should move us to attune our conscience to God’s thinking. This, in turn, will keep us united with fellow believers.”

Note too the beliefs Jehovah’s Witnesses have that take away a person’s individualism, including the direction that women all wear skirts and dresses at meetings and when preaching and men all be clean-shaven, and the prohibitions against sexual matters even between married couples. 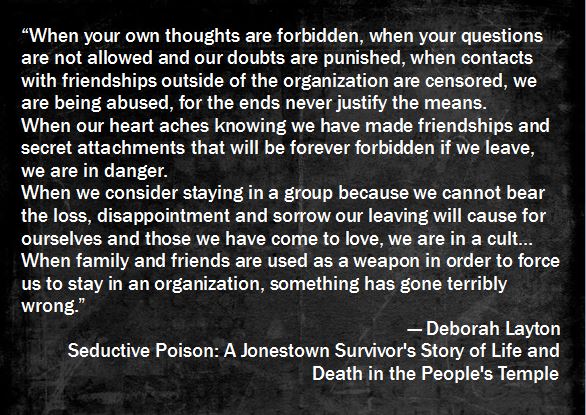 Labeling alternative belief systems as illegitimate, evil, or not useful
"Other Christian religions are referred to by Jehovah’s Witnesses as Christendom, and a search of their literature will show that they refer to these as “unfaithful,” as being rejected by god (November 15 2004 Watchtower), “pagan,” “steeped in false worship” (February 15 2001 Watchtower), with “reprehensible actions and false teachings” (Isaiah’s Prophecy book, pages 390-402). The Isaiah’s Prophecy book also states that “calamity will come upon unfaithful Christendom, whose members claim to worship God but actually disown him by their works.” (Pages 230-243)"

"All other religions outside of Jehovah’s Witnesses are referred to as “false religions.” The September 15 2012 Watchtower simplified edition stated that the world would come to an end first by seeing “false religion” destroyed. The September 15 2004 Watchtower said, “Satan has, in fact, built up a world empire of false religion, identified by rage, hatred, and almost endless bloodshed.” The May 1 2012 Watchtower stated that there are two types of religion; one false, and one true, and that true religion would be those who “serve Jehovah.” The book What Does the Bible Really Teach notes that false religion does not use idols, celebrate holidays (with a special emphasis on why the true religion would not celebrate Christmas), or worship ancestors."

The Organization Above All Else
"One teaching that I would think would make a group cult-like or abusive is if they feel the organization should come above all else, even the health and safety of its members.

Before their official policy was rewritten in 2010, parents were outright forbidden from calling the police in matters of child sexual assault, so they wouldn’t bring reproach on the organization. As brought out, women in abusive marriages are encouraged to stay so that the man gets a “witness” and hopefully converts to the religion.

Children in the religion are strongly encouraged to give up higher education in favor of preaching and missionary work, or unpaid volunteer services at one of their branch offices or headquarters (May 2010 Kingdom Ministry).

Perhaps one of the most obvious cases of putting the organization above everything else when it comes to being one of Jehovah’s Witnesses is the practice of disfellowshipping, or excommunication, and the all-encompassing shunning that goes along with it. Despite the claim that the religion builds strong family bonds, this practice is based on the flimsiest of scriptural applications and outright misquotes (see this post), and yet members will shun even their own children who are still living at home or their elderly parents and grandparents. When a family member is shunned, their extended family (children, grandchildren) are also typically shunned along with them, even if these ones were never Jehovah’s Witnesses in the first place."

SO ARE JEHOVAH’S WITNESSES A CULT OR NOT?
"I don’t know if Jehovah’s Witnesses could legally or technically be called a cult, and 11,000 words later I still don’t care. What I do know is that they are abusive, controlling, obscene, harshly judgmental, misogynistic, and just plain unloving. They misquote and misapply scripture, have made many false prophecies and have changed their beliefs many times over.

Jehovah’s Witnesses emotionally blackmail their members into staying and abandon those who do to some of the most horrific abuses imaginable. They create guilt, depression, stifling childhoods and marriages, and downright unhappy congregants. Most ex-JWs, myself included, will attest to this; my own mother tried to commit suicide many times and was regularly in mental health facilities, as were many other women I knew in local congregations. It wasn’t unusual to see women in the back rooms crying during meetings, talking among themselves about their oppressive and abusive marriages but knowing they could do nothing about them. Depression was common, as was alcohol abuse and the use of antidepressants. Most men I knew in the religion were angry, oppressive, condescending, arrogant, and downright rude to congregants; after all, they could certainly afford to be, since they had absolute authority over members and anyone who didn’t like it could be disfellowshipped and was going to die at Armageddon. Many of us children grew up nervous, anxious, afraid of our own parents, terrified to go to meetings for fear of a beating, and dreading yet another Saturday being dragged out into the preaching work.

At the end of the day, this religion costs people their lives, not to mention children their innocence and many people their happiness, all because of scriptures they obviously don’t understand, predictions they have to repeatedly change, and teachings which seem to do nothing but allow them to wield more power over others.

The power that cults and other such groups have over their members is referred to in the legal arena as “undue influence,” and I absolutely hate that phrase. Why? Because it doesn’t even come close to describing the horrific abuses and control this religion has over its members.

I don’t know how to define Jehovah’s Witnesses, but if the words of a woman who survived the Jonestown massacre could easily be applied to them, I would say there’s probably a number of labels that would fit, “cult” being just one."

TheAbove quotes are extracted from the article entitled, Beware the Cult-Like Control and Abuse of Jehovah’s Witnesses - you can read the whole article by clicking HERE.

30 Questions to Get a Jehovah’s Witness to Think!