There’s nowhere else in the world quite like it. You can’t help but be blown away by the number of solar panels gleaming from almost every surface in the city. From the top of its buildings to the roof of its buses.

Dezhou, China is the world’s first solar city, with 98% of its power produced by solar energy. It’s inspiration of Chinese entrepreneur Huang Ming.

China Icons got the guided tour from one of his engineers Ni Weiyue. Thanks to dreaming big, being innovative and leading by example, Dezhou has replaced 600,000 tons of coal a year with green technologies and energy.

Could this be the model for future cities across the world?

When Huang Ming saw the damage caused by pollution in his home town, he was devastated. That, followed by the birth of his daughter soon after, inspired him to quit his day job and dedicate his life and bank balance to solar energy research.

Today, the company Huang Ming founded - Himin - has become one of the world's most successful solar energy companies.

Huang Ming takes us on a personalised tour of his city and the inspiration behind his favourite buildings - the Sun and Moon Mansion and the factories topped with solar panels. He also reveals some of the research and development Himin are doing to introduce solar power into everyday items used across the world.

Half of China's population now use solar energy and the country makes the most solar heaters and panels in the world. But with this adding up to just 1% of the world's energy consumption, Huang Ming believes there's so much more still to be done.

Chongqing, Chinese mega city that reminds us on Manhattan might get impressive new complex, right between the Yangtze and Jialing rivers. Architects from an international architecture firm Safdie Architects designed this huge piece of modern architecture, a mixed-use complex of skyscrapers for the point where two rivers meet. 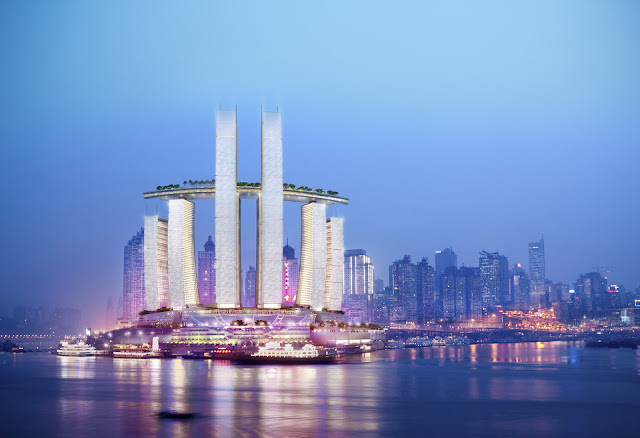 Two central towers should be 358m (1,175ft) tall while the shorter ones should be 248m (814ft). Huge platform will connect all four towers offering space for rooftop gardens, clubs and pools.
"Located at the confluence of the Yangtze and Jailing rivers, the site for this mixed-use project is imbued with a significance that is immediately symbolic. The foremost of Chongqing’s traditional city gates (the Chaotian Gate, or “gate to heaven”), where emperors carried out the ceremonies of diplomatic greeting, it has long been a historical landmark... MORE PLS CLICK HERE.

China wants to build 100 panda-shaped solar power plants. They've already built one and have begun another. From the air, the collection of panels looks just like a cartoon panda. Each individual plant will, over a 25-year period, save 1.06 million tonnes of coal and cut greenhouse gas emissions by 2.74 million tonnes.

Doctrine on the Sabbath

Doctrine on the Sabbath
Excerpt and Quotation from: An Answer to the Jews by Tertullian (145 - 220 ad)
"It follows, accordingly, that, in so far as the abolition of carnal circumcision and of the old law is demonstrated as having been consummated at its specific times, so also the observance of the Sabbath is demonstrated to have been temporary.
For the Jews say, that from the beginning God sanctified the seventh day, by resting on it from all His works which He made; and that thence it was, likewise, that Moses said to the People: 'Remember the day of the sabbaths, to sanctify it: every servile work ye shall not do therein, except what pertaineth unto life.' Whence we (Christians) understand that we still more ought to observe a sabbath from all 'servile work' always, and not only every seventh day, but through all time. And through this arises the question for us, what sabbath God willed us to keep? For the Scriptures point to a sabbath eternal and a sabbath temporal. For Isaiah the prophet says, 'Your sabbaths my soul hateth;' and in another place he says, 'My sabbaths ye have profaned.' Whence we discern that the temporal sabbath is human, and the eternal sabbath is accounted divine; concerning which He predicts through Isaiah: 'And there shall be,' He says, 'month after month, and day after day, and sabbath after sabbath; and all flesh shall come to adore in Jerusalem, saith the Lord;' which we understand to have been fulfilled in the times of Christ, when 'all flesh' - that is, every nation - 'came to adore in Jerusalem' God the Father, through Jesus Christ His Son, as was predicted through the prophet: 'Behold, proselytes through me shall go unto Thee.' Thus, therefore, before this temporal sabbath, there was withal an eternal sabbath foreshown and foretold; just as before the carnal circumcision there was withal a spiritual circumcision foreshown. In short, let them teach us, as we have already premised, that Adam observed the sabbath; or that Abel, when offering to God a holy victim, pleased Him by a religious reverence for the sabbath; or that Enoch, when translated, had been a keeper of the sabbath; or that Noah the ark-builder observed, on account of the deluge, an immense sabbath; or that Abraham, in observance of the sabbath, offered Isaac his son; or that Melchizedek in his priesthood received the law of the sabbath.

But the Jews are sure to say, that ever since this precept was given through Moses, the observance has been binding. Manifest accordingly it is, that the precept was not eternal nor spiritual, but temporary, which would one day cease. In short, so true is it that it is not in the exemption from work of the sabbath-that is, of the seventh day-that the celebration of this solemnity is to consist, that Joshua the son of Nun, at the time that he was reducing the city Jericho by war. stated that he had received from God a precept to order the People that priests should carry the ark of the testament of God seven days, making the circuit of the city; and thus, when the seventh day's circuit had been performed, the walls of the city would spontaneously fall. Which was so done; and when the space of the seventh day was finished, just as was predicted, down fell the walls of the city. Whence it is manifestly shown, that in the number of the seven days there intervened a sabbath-day. For seven days, whencesoever they may have commenced, must necessarily include within them a sabbath-day; on which day not only must the priests have worked, but the city must have been made a prey by the edge of the sword by all the people of Israel. Nor is it doubtful that they 'wrought servile work,' when, in obedience to God's precept, they drave the preys of war. For in the times of the Maccabees, too, they did bravely in fighting on the sabbaths, and routed their foreign foes, and recalled the law of their fathers to the primitive style of life by fighting on the sabbaths. Nor should I think it was any other law which they thus vindicated, than the one in which they remembered the existence of the prescript touching 'the day of the sabbaths.'
Whence it is manifest that the force of such precepts was temporary, and respected the necessity of present circumstances; and that it was not with a view to its observance in perpetuity that God formerly gave them such a law." - Tertullian
Tertullian, exerpt from Ante-Nicene Fathers, Vol III, Tertullian, "Of the Observance of the Sabbath," Chapter IV.