Idolatry and the Construction of the Spanish Empire

" “An informative and thought-provoking text that provides a deeper look into the theological machinations of Spain’s religious trajectory as carried out in the peninsula and the colonies. . . . The author takes transatlantic colonial scholarship further than many scholars have dared to go.”
—Marie-Theresa Hernandez, University of Houston

An ethnohistory on the spiritual and governmental conquest of the indigenous people in colonial Mexico, Idolatry and the Construction of the Spanish Empire examines the role played by the shifting concept of idolatry in the conquest of the Americas, as well as its relation to the subsequent construction of imperial power and hegemony.

Contrasting readings of evangelization plays and chronicles from the Indies and legislation and literature produced in Spain, author Mina García Soormally places theoretical analysis of state formation in Colonial Latin America within the historical context. The conquest of America was presented, in its first instances, as a virtual extension of the Reconquista, which had taken place in Spain since 711, during which Spaniards fought to build an empire based in part on religious discrimination. The fight against the “heathens” (Moors and Jews) provided the experience and mindset to practice the repression of the other, making Spain a cultural laboratory that was transported across the Atlantic Ocean.

Idolatry and the Construction of the Spanish Empire is a wide-ranging explication of religious orthodoxy and unorthodoxy during Spain’s medieval and early modern period as they relate to idolatry, with analysis of events that occurred on both sides of the Atlantic. The book contributes to the growing field of transatlantic studies and explores the redefinition that took place in Europe and in the colonies.


Mina García Soormally is associate professor of Spanish in the Department of World Languages and Cultures at Elon University, where her research focuses on early modern Spanish theater and trans-Atlantic studies. She is the author of Magia, hechicería, y brujería: Entre La Celestina y Cervantes." - https://upcolorado.com/university-press-of-colorado/item/3515-idolatry-and-the-construction-of-the-spanish-empire 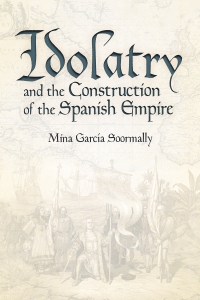 The coming Idolatry in Naga City, Camarines Sur, Philippines is an event that glorifies the name of a demon called "INA". An idol and an abomination that is against the true worship of our GOD an Eternal Spirit who manifested in the Flesh in the person of Jesus Christ, the 2nd person in the Godhead of a Triune Eternal being. We all know that the Spanish and their conquests to the so-called New World brought worship of idols in the names of Saints in exchange for their pagan idolatry. Constantine's Christianity deceived the whole world in the name of a false Jesus and a false worship to the Roman god and godesses. The Roman Empire as prophesied by the Prophet Daniel became a feet of iron and clay and soon will be destroyed by the coming of the Rock of all ages.