This is part 2 of CONSTANTINE ANTICHRIST.

In this part you will see the video entitled The Deception of Constantine. This video is about "  how Constantine was used during the early 4th Century to create a New One World Religion based on Nimrod's Mystery Occult Babylonian Religion but Roman version populary know as MITHRAISM and mixing Judeo-Christian faith, which would give us an idea where Romanism really started. This is an excellent documentary roughly 45 minutes long documentary about Constantine based on archaelogical evidences and ancient writings portraying on how Constantine pretended to be a follower of Jesus of Nazareth. This documentary will take us to the true identity of Constantine, including what really is the spirit behind his fabrication of a New Roman Religion. Historical writings tells us that Constantine and Licinius issued the EDICT of MILAN that legalized Christianity and became the Offical Religion of the Roman Empire, hence Constantine became the First Emperor (First POPE?) of the Roman Catholic Empire and was also given honorary title and office of a bishop." - The Deception of Constantine:The beginnings Romanism.(Youtube) 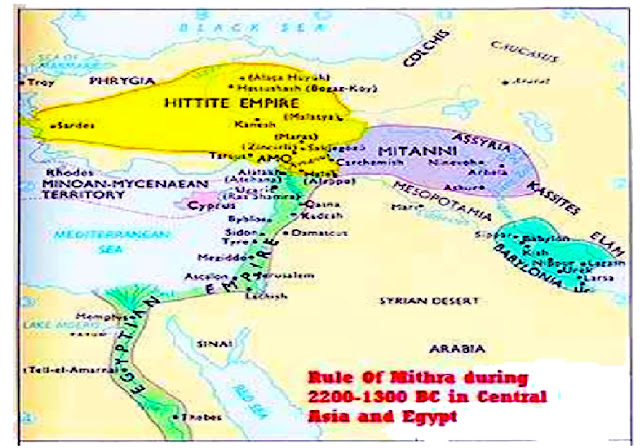 "Mitanni Aryans were the first to introduce Mithra to Egyptian Pharaohs that allowed them to incorporate into their earlier pagan worship of Osiris and Amun. The “Ra” or “Re” was the designated ancient Egyptian solar deity. By the Fifth Dynasty, Mitra or Mithra had emerged as a major god in ancient Egyptian religion, identified primarily with the midday sun. The meaning of the name “Ra” may be uncertain, but it is thought that it is a variant of or linked to Persian words like “Rau”, a 'creative power' and 'creator' of the earth, that is sun, the star of our planetary system. The major cult centre of “Ra” was located at ancient Heliopolis of Egypt or land of Khemit where he was labeled as the local sun-god “Atum” or “Atum-Ra. In later Egyptian dynastic times, Ra was merged with the god Horus, as “Re-Horakhty” and even “Osiris”. 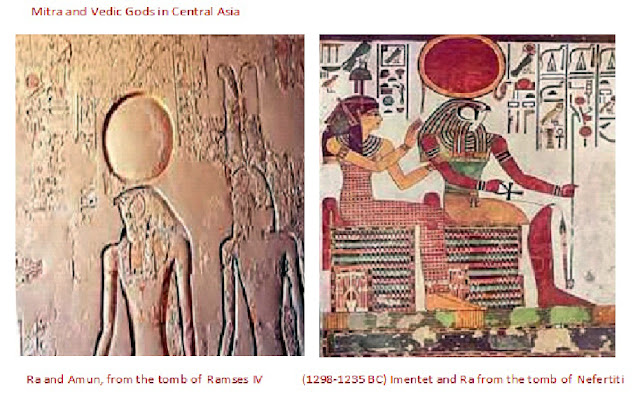 Introduction of Central Asian cult of Mithra to Roman Europe:


The Persian’s Expansion To Greece and later on followed up by Alexander’s conquest allowed Mithra to meet and merge in union with Hellenist pantheons along with Egyptian God- Goddess. This cross cultural continuum existed in all these territories when Roman arrived.

When Persian ruled Central Asia all the way to Anatolia, they brought with them the worship of Mithra that was peaceful in nature but initially involved the animal sacrifice. The local habitants were Phrygians, Ionian Greeks and other Asian Semite tribes. The Romans attributed their association to “Mithraic Mysteries” to the Persians. The territories of Judah and Anatolia that Romans had conquered from Greeks where already practitioner of Judaism, Mithraism or Zoroaster’s religion (similar to Mithra). The Romans had their own pagan worships that included the worship of Roman emperors, so were early Greeks. The Roman learned that Anatolians were worshippers of Mithra along with other cults of Greece and  Egypt. The cross cultural exchange introduced Indian-Iranian Mithra to the Ionian, the Lydian, the Phrygian, the Thracian, and the Celtic-Gaul of Anatolia who incorporated them with their chosen pagan gods.
Although Christianity only took hold as an official religion under Emperor Constantine, Constantine himself was a follower of Mithraism and remains so and by some account through his life until he was baptized as Christian at his death bed. The Yazata of Persian was interpreted as “angels” in Christianity. According to Martin Haug, the “Amesha Spentas” of Zaruashtra’s became the arch-angel Gabriel of Christianity. The Mithraic Mystery thus became the deviant form of religion practiced in Central Asian states due to previous dominance of the Achemenians Persians and then followed by Indo-Greeks Seleucid rulers of Bactria.
The Mithraism was introduced to European Roman world through Roman soldiers who had intermarried with locals Anatolians and Asian Semite and Jews. This was further facilitated by prolonged absence of soldiers from home so they took local mistress. Simultaneously, they sent slaves and trader-visitors from conquered territories of Asia to Rome. The trade link with Persia and India also helped introduce the tradition and rituals of Mithra. The expansion of Roman Empire all the way to Anatolia, Greece and Egypt brought these new cultural dimensions to ancient Rome.
Mythology of Mithra in Roman world and its similarities with Jesus’s story:
The name of the Persian god Mithra (proto-Indo-Iranian Mitra), adapted by the Greek as Helios and Attis, assumed a new and distinctive imagery on Greek model in the Roman world. The Writers of the Roman Empire world referred to this as a mystery religion by phrases which can be anglicized as “Mysteries of Mithras” or “Mysteries of the Persians” or “Mysteries of Magi”, The high priest of Persian Mithra introduced the magic of healing through ancient knowledge known from India, Persia and east. The name of this commingled religion in an altered form was dubbed as “Roman Mithraism” due to its practice, rituals and presence in Rome proper. We see various depiction of Buddha in Caucasian form as well as Mongolian form." - extracted from Origination of Christianity from Sun worshiping Tradition Of Indian and Persian-Mithraism: By: Bipin R. Shah - read the whole article HERE. 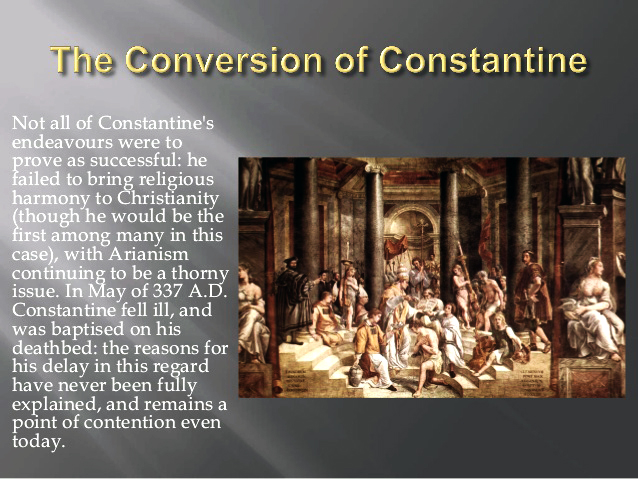 "Despite his supervisory role in the Council of Nicea and his self-appointed role as bishop, Constantine postponed his baptism until 337, when he was on his deathbed.
Baptized or not, he played a major role in shaping traditional Christianity. While Eusebius looked approvingly on Constantine’s actions as a demonstration of true Christianity, more reflection on his part might have produced a different perspective.

Reevaluating both Christian and pagan sources of that time, we might rather conclude that Constantine used Christianity to serve his own purpose of unifying and controlling his empire. The early New Testament church in apostolic times existed apart from the empire. Constantine made his Roman Christian church hostage to the state so that now it would serve the needs of emperor and empire.

By the end of the fourth century, that church was modeled on the political structures of the Roman Empire it served, and not on the Bible. It assumed the power of the state to establish “right thinking” on the part of its members. Orthodoxy became the order of the day. While pagans and diverse Christian groups continued to coexist and to shape ecclesiastical debates into the fifth century, a powerful organization had been created that would control and expunge from the empire any religious elements deemed unorthodox." -  Vision 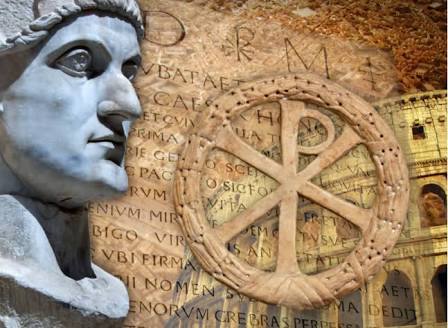