The spirit of the Anti-Christ and Deceiver 2018

Alien Greys are really Demonic Entities. This is a re-upload from my older channel. Interviews taken of ex-Wiccans and Satanists (now Christians) indicate a high level of personal contact with various alien types, especially during coven meetings and holiday rituals.

Those coming from the highest echelon of Satanism, known as the Illuminati, believe the original people who inhabited the earth descended from Mars via the Moon. They believe the first established civilization was Atlantis. Renowned for their superior intellect, the Atlanteans suffered the same fate as a few of the proceeding cultures already mentioned. The remnant people from Atlantis became the American Indians, according to their interpretation of history. 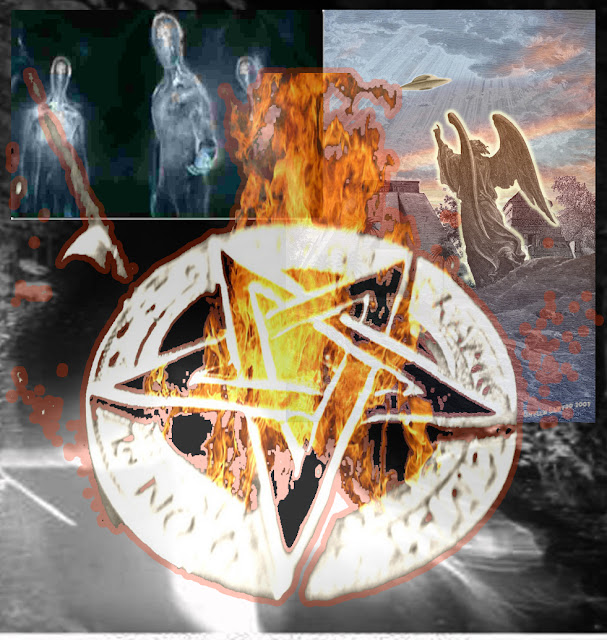 Individuals possessing a high degree of psychic ability. Similar phenomena occurring with other family members (multi or trans-generational).Native Americans and/or indigenous peoples. Children who have been subjected to severe abuse or trauma. Individuals and/or family members affiliated to government and/or military intelligence agencies or departments. In conjunction, a strong relationship exists between occultic ritual sites, top secret military installations, and UFO/alien sightings and abductions. There also appears to be a magnetic spiritual vortex (or vacuum), which has drawn many "New Agers" into these areas (Taos, NM; Sedona,AZ; Boulder, CO, etc.). One prime example is the area near Dulce, NM, where the Defense Advanced Research Projects Agency (DARPA) has a highly-secured underground complex on the Jicarella Indian Reservation -- a region known for Native American shamanism. The facility is said to be used for genetic engineering, including cloning. Several witnesses who were employed there reported seeing different breeds of aliens.


"THE WAY: Lam is the Tibetan word for Way or Path, and Lama is He who Goeth, the specific title of the Gods of Egypt, the Treader of the Path, in Buddhistic phraseology." Drawing of Lam by Aleister Crowley as found in the commentary of Helena Blavatsky's "The Voice of Silence," published in The Equinox III, no. I

Coincidentally, it was the area where Charles Manson and family resided in the late 1960s. It was also the general location described in the book, Outside the Circle of Time (1980), by Kenneth Grant. A portion of the book states, "John Whiteside Parsons [who specialized in jet propulsion] and L. Ron Hubbard, founder of #Scientology [and former Naval Intelligence Officer] were involved in a special project during 1945 and 1946... This special project, which was carried out in the California desert, was a part of magical ceremonies [black witchcraft] known as the 'Babylon Working', designed by Aleister #Crowley, who died in 1947 [year of the alleged #Roswell UFO crash and the implementation of the National Security Act]... The purpose of the series of ceremonies performed by Parsons and Hubbard was to unseal an inter-dimensional gateway that had been sealed in antiquity, thereby allowing other dimensional entities, known as the 'Old Ones,' access to our space/time continuum. The culmination of the ceremonies was reported to have been successful, having resulted in the establishment of 'extra-terrestrial contact'... Crowley left behind a drawing of his invisible mentors or, as he called them, 'Secret Chiefs' [spirit guides], entitled LAM. This entity has a very large head on a small body, a pointed chin, and a little slit of a mouth [description compares favorably to the 'Greys']."

Several abductees, psychics (through out-of-body experiences), and former employees of the Dulce facility reported seeing large vats, full of blood and body parts; essentially, a human stew . Their understanding is that particular varieties of aliens, mostly "Greys," bathe in these vats to absorb nutrients through their skin. One of the secretions these aliens crave is adrenaline, which is generated in great quantity when the victim is tortured or traumatized at the moment of death. This glandular hormone is most potent in children.
Newer Posts Older Posts Home
Subscribe to: Posts ( Atom )