NAGA VIPER - The Truth About it!

"The Naga Viper held the record for the world’s hottest pepper for a very short time and has since been beat by 4 other peppers and is currently the 5th hottest pepper. It is an unstable 3-way hybrid between a Naga Morich, Bhut Jolokia (Ghost Pepper) and a Trinidad Scorpion created in the UK. Its short reign has made this one of the more rare and hard to find seeds."- https://www.crazyhotseeds.com/shop/naga-viper/ 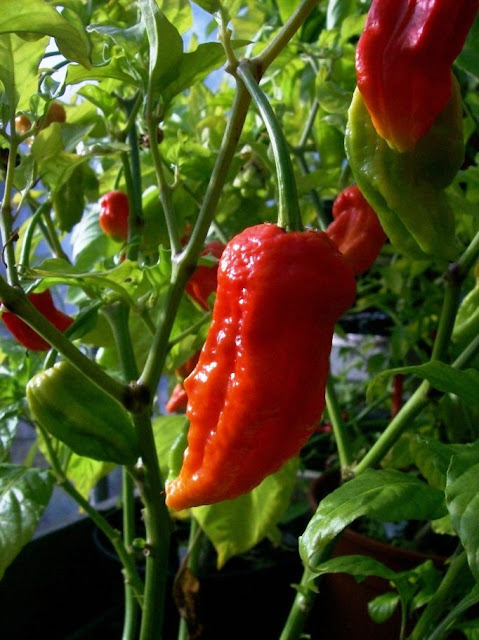 "The Naga Viper pepper is one of the hottest chili peppers ever measured. It was briefly the "World's Hottest Chilli" in 2011 according to the Guinness World Records with a rating of 1,382,118 Scoville Heat Units (SHU), a figure that surpassed the reading of the Infinity Chilli.

The Naga Viper was created in England by chilli farmer Gerald Fowler of The Chilli Pepper Company in Cark, Cumbria. It is claimed to be an unstable three-way hybrid produced from the Naga Morich, the Bhut Jolokia and the Trinidad Scorpion (some of the world's hottest peppers). Due to its hybrid nature it is unable to produce offspring exactly like the parent due to segregation of alleles, and therefore traits."  https://en.wikipedia.org/wiki/Naga_Viper_pepper ) 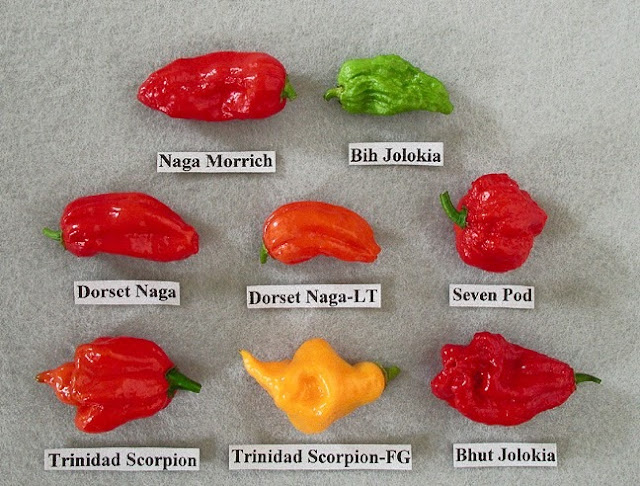 "It is capsaicin that makes chillies hot. The heat is measured in Scoville heat units, which is the number of times a sample of dissolved dried chilli must be diluted by its own weight in sugar water before it loses its heat. For a green bell pepper this is zero. But habanero peppers have a Scoville value of between 100,000 and 350,000. For pure capsaicin the figure is 16 million.

While the Satanic-red horns of chillies seem to hint at their throat-scorching potential, extracted capsaicin is an odourless and colourless substance. Chilli-maniacs can buy phials of the stuff on the internet, though its use as a food additive is banned in the EU. 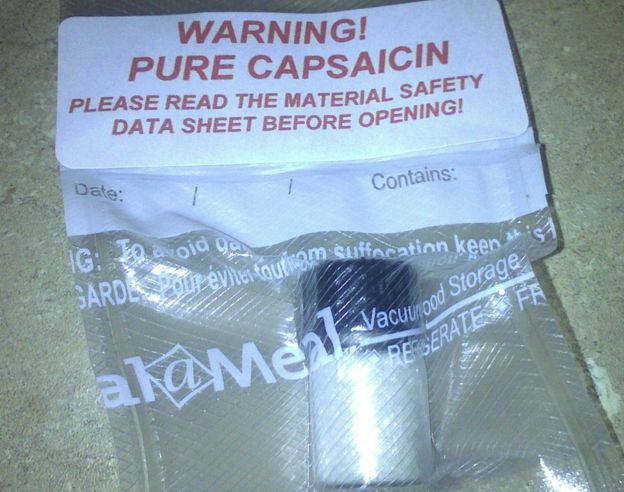 It is used in pepper spray, however. The use of chilli peppers as weapons dates back to pre-Columbian times, when, it's said, Mayans burned rows of them to create a stinging smokescreen. And in what may have been a pre-Columbian version of the naughty step, an ancient Aztec codex shows a parent propelling a teary-eyed infant near a pit of burning chillies.

However, the Aztec codices also tell us that they put chilli on their teeth to kill toothache pain, and the use of capsaicin as an analgesic also continues to this day.

It is sometimes said that people in hot countries use more chilli because it makes them sweat, which cools them down. But in 1998, researchers at Cornell University pointed out that the greater use of spices in countries such as India, Thailand and China was likely to be linked to their anti-microbial function. By studying recipe books from all over the world, the researchers found that spices including chilli were more likely to be used close to the equator, and were also used more in humid valleys than on high plateaux. 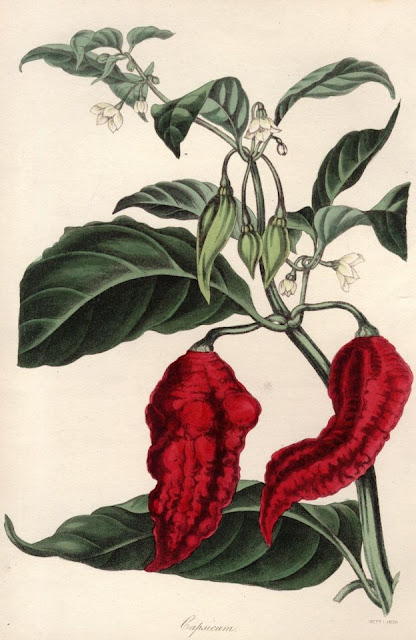 This correlation with climate, and the attendant risk of infectious disease, was greater than the link with the right growing conditions for the spices. In other words, humans in dangerous climates developed a taste for chilli which, as Joshua Tewksbury puts it, "probably saved them a lot of death".

We now know that chillies are also a good source of antioxidants. Forty-two grams of the spice would account for your recommended daily allowance of vitamin C, although admittedly that would make for a pretty strong curry. They are also rich in vitamin A, as well as minerals such as iron and potassium.

Capsaicin has even been touted as a potential weight-loss tool. Research conducted this year by the University of Wyoming on mice that had been fed a high-fat diet found that the molecule increased metabolic activity in the animals, causing them to burn more energy and preventing weight gain. In another study, published last month in Plos One, researchers at the University of Adelaide found that the receptors in the stomach that interact with capsaicin play a role in sensing when we are full. Previous studies on humans seem to back the idea that eating spicy food seems to curb our appetite.

But what about heart disease and cancer? The recent study in China found a correlation between the consumption of spicy food and lower rates of death from those diseases - and laboratory research from the last 10 years suggests some possible reasons for that too.

In 2012, a team of nutritionists at the Chinese University of Hong Kong, working with hamsters, found that capsaicin helped break down so-called "bad" cholesterol which might have clogged up the animals' arteries, but it left alone the "good" cholesterol which helps remove it. There was a second benefit for cardiac health too - the capsaicin appeared to block the action of a gene that makes arteries contract, restricting blood flow.

Several studies have also indicated that capsaicin has powerful anti-cancer properties. It has been found to be helpful in fighting human prostate and lung cancer cells in mice, and there are also indications that it could be used as a treatment for colon cancer. It may also improve drug resistance for bile-duct cancer sufferers.

But before people make any radical changes to their diet, they are advised to wait for a clinical trial to be conducted using humans, not rodents.

"There are a lot of reports that say that capsaicin may be good for human health, especially with cancer," says Zigang Dong at the Hormel Institute of the University of Minnesota. "However, there are other reports that show totally the opposite result."

Dong is the co-author of a 2011 review, published in the journal Cancer Research, titled The Two Faces of Capsaicin, in which claims about the spice's benefits for health are laid alongside a long list of counter-claims, pointing to negative effects.

The report details six studies on rats and mice in which the animals developed signs of cancer in the stomach or liver after their diet was changed to include more capsaicin. Meanwhile, studies examining the effects of capsaicin on the human stomach have delivered wildly divergent results. While one showed visible gastric bleeding after consumption of red pepper, another showed no abnormalities, even when ground jalapeno peppers were placed directly in the stomach." - http://www.bbc.com/news/magazine-34411492

"Capsaicin, the compound responsible for chilis' heat, is used in creams sold to relieve pain, and recent research shows that in high doses, it kills prostate cancer cells. Now researchers are finding clues that help explain how the substance works. Their conclusions suggest that one day it could come in a new, therapeutic form. Their study appears in ACS' The Journal of Physical Chemistry B.

About 10 years ago, researchers reported that capsaicin can kill prostate cancer cells in mice while leaving healthy cells unharmed. But translating that dose to humans would require them to eat a huge number of chili peppers per day. Figuring out how capsaicin works could help researchers transform it into an effective drug in the form of an injection or pill.

Researchers have figured out that the molecule binds to a cell's surface and affects the membrane, which surrounds and protects the cell. That finding prompted Ashok Kumar Mishra and Jitendriya Swain to try to gain a deeper understanding of capsaicin's effects so it might be harnessed in the future for new medicines.

The scientists were able to detect how the compound interacts with cell membranes by monitoring its natural fluorescence. The study showed that capsaicin lodges in the membranes near the surface. Add enough of it, and the capsaicin essentially causes the membranes to come apart. With additional research, this insight could help lead to novel tools against cancer or other conditions." - http://www.news-medical.net/news/20150910/Compound-responsible-for-chilis-heat-may-help-kill-prostate-cancer-cells.aspx

"Chilies have antioxidants that can destroy cholesterol which could cause major disease like atherosclerosis and other heart diseases. Other disease like eye cataracts and arthritis, like osteoarthritis and rheumatoid arthritis. It also dilates airway of lungs which reduces asthma and wheezing.

Live long, strong and healthy, eat SILI everyday! Chili is good for you...that is the truth about it! " - http://www.onlinena.ga/2015/01/sili-truth-about-it.html

Sex and Religion in Manila


It is surprising why many so-called "Pinoys" or Filipinos doesn't want to accept the fact that the country is full of corrupt religious leaders in the government. Perhaps it is because it is embedded in our culture.? 'May kasabihan, kung ano ang puno siya rin ang bunga.' We are numb because it has become part of us our culture and we are used to it. 'Nakasanayan na nating mga noypi?' For more than four hundred years Roman Catholicism who was brought by the Spaniards is still dominating our country's government. You can call me anti-Roman Catholic but history tells us that Romanism is a corrupt religion that should be rejected. With hundred of cases of pedophilia, human rights violations against nations and cultures, including falsification of documents together with conspiracy in acquiring land and riches of other kingdom and nations, the Philippines is just one of many of them who suffered injustice and deception from the hands of this pseudo-religion who has a great influence in the world's ruling class and mass media. - MORE -http://www.webmalaya.info/2015/01/pater-corruptelarum.html 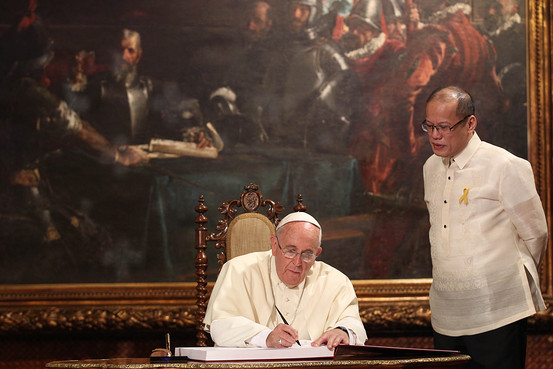