The Italian Mafia, Jesuits, and the 9/11 Gold Heist -  by AhuwahZeus
It was mafia connected companies that got the contracts with the Port Authority of New York and New Jersey to clean up the debris after 9/11. Anthony Fontanetta and Mark Jakubek were executives at the Port Authority and found guilty of racketeering and bribery involving millions in stolen cash from federal aid for ground zero clean up. About 19 others plead guilty as well in this racketeering. The port authority has a history with organized crime however on 9/11 the Port Authority's records were destroyed because they were located in Tower 7. Owners of the construction company Peter Scalamandre & Sons were convicted of paying off members of the Lucchese crime family for labor racketeering prior to 9/11. Peter Scalamandre & Sons was later shut down working as sub contractors during the ground zero clean up. The major clean up companies used smaller contractors to carry out much of the work. Many of the smaller contractors like Peter Scalamandre & Sons were connected with the Italian Mafia.

The major companies for the 9/11 clean up were the London AMEC subsidiary AMEC Construction, Bovis Lend Lease, Tully Construction and Turner Construction being funded with over 450 million for clean up. These larger companies used smaller sub contractors and many of these companies were tied with the Five Families and their associates. The subcontractors payments were in the range of 60 million of that 450 million in clean up aid. It is believed that about 63 million went to mafia connected construction and clean up companies.  Salvatore Carucci is believed to be a Lucchese associate and is the owner of Seasons Contracting which received over 26 million for his company's clean up work. Allen Monchik who has been convicted of fraud worked as a consultant making calls hours after 9/11 to the port authority, asbetos companies and to mafia associates like former Lucchese boss Louis Daidone and mafia associate Noel Modica. The District Attorney's investigators tracked these calls while investigating corruption involved with these asbestos companies. 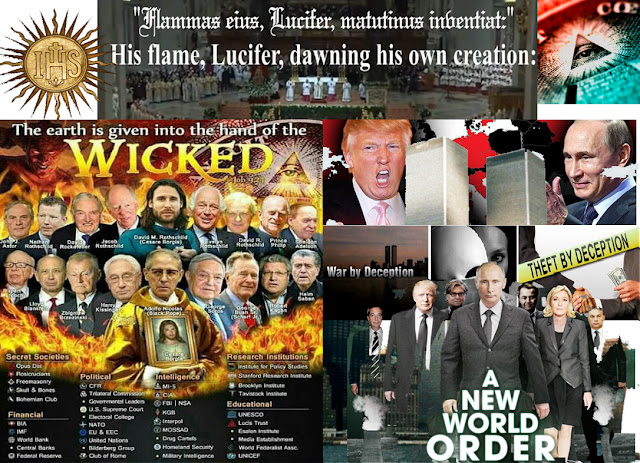 On September 11, 2001 Donald Rumsfeld who was Jesuit educated from Georgetown ran the Department of Defense as Secretary of Defense, George Tenet who was also Jesuit educated from Georgetown ran the Central Intelligence Agency, and Michael Copps who was a Jesuit professor at Loyola University of New Orleans ran the Federal Communications Commission which regulates all broadcasting inside of the United States. The US armed forces, CIA, and FCC were all under the supervision of Jesuit alumni and professors. The real theft on 9/11 goes back to Franklin D Roosevelt and his Executive Order 6102 which criminalized the ownership of gold in the United States and demanded all gold to be handed in under the threat of fines and imprisonment. This gold was covertly held underneath the Federal Reserve Bank of New York. On 9/11 William Joseph McDonough was President of the Federal Reserve Bank of New York and was Jesuit educated from Georgetown and he oversaw this theft. After 9/11 the gold was removed from the FRBNY under the disguise of ground zero debris. The gold was then shipped out through the Port Authority and sent to London and Rome.


The purpose of the Zionist organisation is to destroy the Jews.

To do this, the English, under the Jesuits control, created the Balfour declaration to allow the Jews to go back to Palestine after the Jesuits ultimately fomented WW2 with the Concordat, a treaty between the Papacy and the Nations where the Pope dispose immunity and privileges with those Nations in exchange for duties and obligations of both parties such as:

POWER BUILD UP
During the Dark Ages, the Pope ruled for thousands of years, he had supreme power over monarchs.

THEN CAME THE RECLAMATION
The reclamation resulted in more and more Nations breaking away from Temple Power, the absolute power of the Pope. The Pope claimed to possess two powers represented by two swords on their flags; one sword is spiritual power means that he has the right to dictate religious belief of every human on Earth. The second power is his right, the Temple power, to rule over the government of any nation. This was he exercised during the Dark Ages.

When the Reclamation happened, whole nations broke away and formed the equivalent of today national sovereignty.

When that happened, in 1540, Ignatius Loyola started the Jesuit Order for the purpose of restoring the Temple power of the Pope over the reclaimed Nations of the world, to bring Nations back to the obedient workshop under the papacy rules.

The Rothschilds are Papal court Jews !! they are controlled by the Jesuits.

It's since 1776 that Papal Jews were brought to places of power , to serve the Jesuit Agenda at the same time the people who would research it all would end up blaming the Jews in general for everything, we can see this happening all over the Internet these days.

Without the Jesuit Order across the globe, there is no real enforcement of the Temple Power. Today, there are more than 100,000 Jesuits globally.

Greg takes a look back at 9/11, how the Jesuits/CIA/Mossad orchestrated the war on terror. He also examines ISIS, its roots, funding and how Jesuit Priest Fr. Paolo Dal Oglio should be called the real father of ISIS
Greg Anthony, http://ArcticBeacon.com, gregbeacon@gmail.com