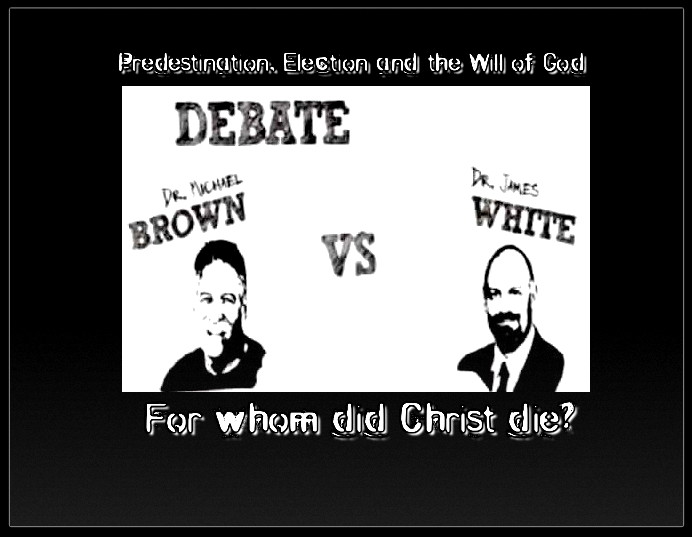 Youtube Video: Dr. Michael Brown vs. Dr. James White - Predestination, Election and the Will of God

For whom did Christ die?

In reflecting on this "debate" Dr. White wrote:

First, I am somewhat uncomfortable with the term “debate” in this instance, for a number of reasons. This might be one of those times where “discussion” is really the better term. The actual interaction time was limited, only about 53 minutes total, after which time our discussion was driven by the audience in the main. And though we both attempted to be as brief and concise as possible, still, without specific time controls, complete equality was not possible to obtain. And particularly in the second discussion we (I think quite properly) had more actual personal interaction on a pastoral level.

Whatever term we choose to describe the discussions, they were most certainly unusual for most of Christian television anywhere in the world, and in Europe in particular. While there may be lots of panel discussions recorded for broadcast, this kind of open and honest disagreement based upon the highest view of Scripture and inspiration, by two participants, both of whom have studied the biblical languages (Michael being the expert in Hebrew, and I having the advantage in Greek), is certainly not your normal fare on what is called Christian television. On that level alone I am very pleased that these programs will be available for viewing for at least the foreseeable future.

This is not the first time Michael and I have demonstrated that you can disagree strongly and still do so respectfully...

Regarding the Atonement Discussion

I did all I could to start the debate on the right foot, which is hard to do in less than five minutes. But I focused upon what must be the heart of any such discussion: the vital relationship between the extent of the atonement and the divine intention of the atonement. This element, together with 1) the covenantal nature of the death of Christ as the very ground and source of the New Covenant and, 2) the intimate, necessary, and glorious nature of Christ’s high priestly role and hence the connection of atonement and intercession, formed the heart of my argument. I believe a fair analysis of the encounter would confirm that these arguments were not undercut by anything Michael offered. Instead, it was plain to me that his opening arguments were based not on the provision of a biblical doctrine of atonement, but upon a general denial of particularity in salvation itself. He focused far more upon emphasizing “all” passages than upon providing any kind of positive doctrine of intentionality or accomplishment in atonement. This was not a failure on Michael’s part, it is the nature of non- Reformed soteriology in general. It simply does not go deeply into the biblical revelation at this point, for the deepest most illuminating texts on this topic (Romans 8, the Hebrews chapters) are all connected to sovereignty, election, priesthood and intercession. This is why Michael was forced (and this, to me, was the deciding moment in the debate) to divide, conceptually and practically, the atoning work of the High Priest and the intercessory work. So, Christ dies for every individual, even for those already under God’s judgment, but Michael sees how impossible it is to keep that priestly work unified, so he denied that Christ is interceding for those who are already under judgment. Now if he could just follow that thought to its conclusion and see the power of it! Instead, he seemed to wish to deny the fact that even in Israel you had the physical offspring of Abraham and the spiritual offspring of Abraham, and that it is the remnant (λεῖμμα), those who are of faith, who were in view in the sacrifices and the priestly ministrations. So he wished to insist that the sacrifice of atonement on the day of atonemente was for all of Israel, and hence potential in nature. I disputed this on a few accounts, but time did not allow an in-depth discussion.

I would simply point out that 1) the offering in Leviticus 16 is limited to the covenant people of God; it did not make atonement for the Egyptians or Moabites or Assyrians. It was, by nature, covenantal and hence “limited”;

2) there is good ground for arguing for a limitation even within the Old Covenant context based upon the obedience and faith of the remnant of Israel (many bore in their bodies the covenant sign but were not of the remnant as they were not of faith); but most importantly

3) the New Testament text makes the limitation explicit in the phrase τους προσερχομενους δι αυτου τω θεω, those drawing near to God through Him (Hebrews 7:25). In any case, the powerful argument based upon Christ’s high priestly ministry, together with the inarguable fact that the ones for whom the sacrifice is offered and the ones for whom the High Priest intercedes are identical, was clearly presented and defended. I truly wonder how many who heard that program heard about these wondrous truths for the first time? What a privilege to have the opportunity to proclaim them!

Of course, if someone in the audience does not remain focused upon the topic, they may well be distracted by the other issues raised, especially by the audience interaction. Texts such as 1 John 2:2, 1 Timothy 4:10, etc., which I have discussed in depth in my published works, again show that the primary objection to particular redemption is found in a rejection of particularity as a whole, i.e., in objections to election. I can only hope that those who found those objections weighty will take the time to dig into the interactions Michael and I had previously on those topics. 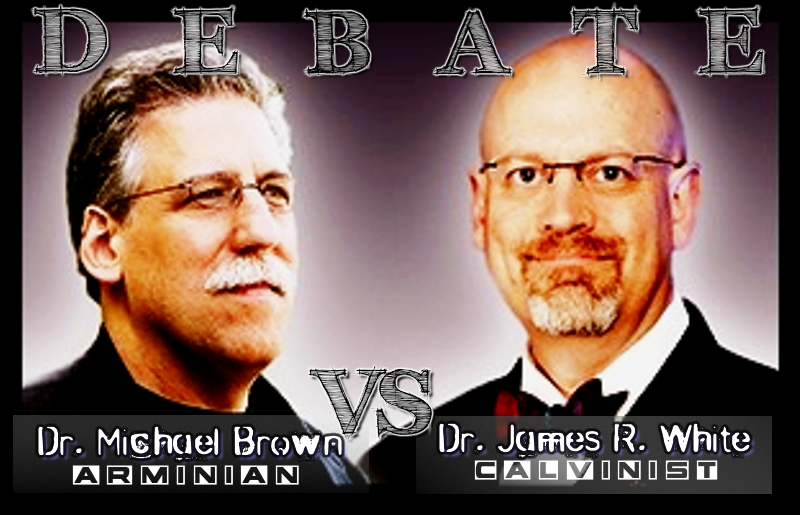 Here then is Part 1: