The European Conflict: Protestant Reformation and The Hidden Roots of the European Union.

"The Protestant Reformation was the 16th-century religious, political, intellectual and cultural upheaval that splintered Catholic Europe, setting in place the structures and beliefs that would define the continent in the modern era. In northern and central Europe, reformers like Martin Luther, John Calvin and Henry VIII challenged papal authority and questioned the Catholic Church’s ability to define Christian practice. They argued for a religious and political redistribution of power into the hands of Bible- and pamphlet-reading pastors and princes. The disruption triggered wars, persecutions and the so-called Counter-Reformation, the Catholic Church’s delayed but forceful response to the Protestants.

DATING THE REFORMATION
Historians usually date the start of the Protestant Reformation to the 1517 publication of Martin Luther’s “95 Theses.” Its ending can be placed anywhere from the 1555 Peace of Augsburg, which allowed for the coexistence of Catholicism and Lutheranism in Germany, to the 1648 Treaty of Westphalia, which ended the Thirty Years’ War. The key ideas of the Reformation—a call to purify the church and a belief that the Bible, not tradition, should be the sole source of spiritual authority—were not themselves novel. However, Luther and the other reformers became the first to skillfully use the power of the printing press to give their ideas a wide audience.

THE REFORMATION: GERMANY AND LUTHERANISM
Martin Luther (1483-1546) was an Augustinian monk and university lecturer in Wittenberg when he composed his “95 Theses,” which protested the pope’s sale of reprieves from penance, or indulgences. Although he had hoped to spur renewal from within the church, in 1521 he was summoned before the Diet of Worms and excommunicated. Sheltered by Friedrich, elector of Saxony, Luther translated the Bible into German and continued his output of vernacular pamphlets.

When German peasants, inspired in part by Luther’s empowering “priesthood of all believers,” revolted in 1524, Luther sided with Germany’s princes. By the Reformation’s end, Lutheranism had become the state religion throughout much of Germany, Scandinavia and the Baltics.

THE REFORMATION: SWITZERLAND AND CALVINISM
The Swiss Reformation began in 1519 with the sermons of Ulrich Zwingli, whose teachings largely paralleled Luther’s. In 1541 John Calvin, a French Protestant who had spent the previous decade in exile writing his “Institutes of the Christian Religion,” was invited to settle in Geneva and put his Reformed doctrine—which stressed God’s power and humanity’s predestined fate—into practice. The result was a theocratic regime of enforced, austere morality.

Calvin’s Geneva became a hotbed for Protestant exiles, and his doctrines quickly spread to Scotland, France, Transylvania and the Low Countries, where Dutch Calvinism became a religious and economic force for the next 400 years.

THE REFORMATION: ENGLAND AND THE “MIDDLE WAY”
In England, the Reformation began with Henry VIII’s quest for a male heir. When Pope Clement VII refused to annul Henry’s marriage to Catherine of Aragon so he could remarry, the English king declared in 1534 that he alone should be the final authority in matters relating to the English church. Henry dissolved England’s monasteries to confiscate their wealth and worked to place the Bible in the hands of the people. Beginning in 1536, every parish was required to have a copy.

After Henry’s death, England tilted toward Calvinist-infused Protestantism during Edward VI’s six-year reign and then endured five years of reactionary Catholicism under Mary I. In 1559 Elizabeth I took the throne and, during her 44-year reign, cast the Church of England as a “middle way” between Calvinism and Catholicism, with vernacular worship and a revised Book of Common Prayer.

THE COUNTER-REFORMATION
The Catholic Church was slow to respond systematically to the theological and publicity innovations of Luther and the other reformers. The Council of Trent, which met off and on from 1545 through 1563, articulated the Church’s answer to the problems that triggered the Reformation and to the reformers themselves.

The Catholic Church of the Counter-Reformation era grew more spiritual, more literate and more educated. New religious orders, notably the Jesuits, combined rigorous spirituality with a globally minded intellectualism, while mystics such as Teresa of Avila injected new passion into the older orders. Inquisitions, both in Spain and in Rome, were reorganized to fight the threat of Protestant heresy.

THE REFORMATION’S LEGACY
Along with the religious consequences of the Reformation and Counter-Reformation came deep and lasting political changes. Northern Europe’s new religious and political freedoms came at a great cost, with decades of rebellions, wars and bloody persecutions. The Thirty Years’ War alone may have cost Germany 40 percent of its population.

But the Reformation’s positive repercussions can be seen in the intellectual and cultural flourishing it inspired on all sides of the schism—in the strengthened universities of Europe, the Lutheran church music of J.S. Bach, the baroque altarpieces of Pieter Paul Rubens and even the capitalism of Dutch Calvinist merchants." - http://www.history.com/topics/reformation

The Hidden Roots of the European Union

"This is Henrik Palmgren's first public presentation on "the Hidden Roots of the European Union" filmed in Bath, UK the 20th of February 2010 at the ARC Convention (at 9.30 in the morning).

We start with the mythology in this presentation and focus on the story of the Phoenician Princess Europe and the abduction by Zeus or the Bull. We look at Knossos, Crete, Snake Goddesses, The Heaven and the Sea, Eve, Idun, the Snake, Knowledge, Who is Europa? 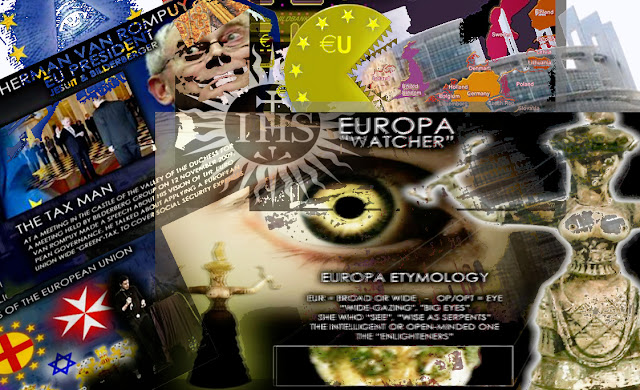 Henrik Palmgren is a filmmaker, radio host, website editor, musician and a researcher into the esoteric, occult and conspiratorial. He has been running the website redicecreations.com since 2002 and has continuously expanded into new forms of media and new areas of research. Henrik lives on the west coast of Sweden where he was born in 1979. He has a background in music, art, media and has been interested in the mysteries since an early age. After 9/11 in 2001, he developed the passion and dedication to help spread information and research to a larger audience on a wide variety of subject matters, many of which are covered on Red Ice and in the film productions of Blue Fire Film."