The Art of Prophesying, by William Perkins 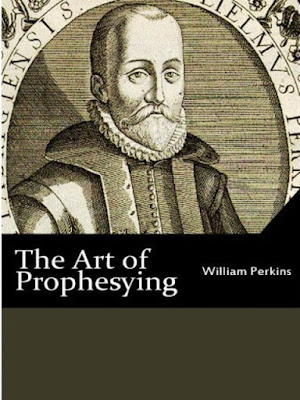 William Perkins (1558-1602) was the first English theologian to gain an international reputation after the Reformation. His works were translated and published throughout Europe. By the end of the sixteenth century in England, his writings began to displace those of John Calvin, Theodore Beza, and Heinrich Bullinger. Because of this, Perkins became known for his powerful preaching, such that he’s remembered for it long after his death.

He served as the preacher at Great St. Andrew’s Church in Cambridge for almost twenty years, from 1584 until his death in 1602. His prominent preaching ministry combined with his vast literary output earned Perkins the honorary title, “the father of Puritanism.” Puritanism as a movement was devoted to placing competent preachers in every pulpit of the Church of England. Competency included right interpretation, plain style, and an ability to apply the text. It was from this foundation that Puritan preaching derived its power.

While Perkins was certainly not the only proponent of Puritan preaching, he was the first to articulate it in a full-scale treatise on hermeneutics and homiletics. He did this in his classic work, The Art of Prophesying, first published in 1592. By “prophesying,” Perkins meant preaching the Word and public prayer. He used this designation because he saw the pastor—as one who stands between God and the people as he exercised these duties—in the great succession of biblical prophets and apostles. Preaching is the focus of his book, and in 75 small, readable pages, he lays out his method of exposition.

Reading the text clearly from the canonical Scriptures.
Explaining the meaning of the text, once it has been read, in the light of the Scriptures themselves.

Gathering a few profitable points of doctrine from the natural sense of the passage.
If the preacher is suitably gifted, applying the doctrines thus explained to the life and practice of the congregation in straightforward, plain speech. (79)
So, Perkins’ preaching method is threefold: interpretation, analysis, and application. He proclaims, “The Word of God alone is to be preached, in its perfection and inner consistency. Scripture is the exclusive subject of preaching, the only field in which the preacher is to labor” (9). For Perkins, proper interpretation begins with grammar, rhetoric, and logical analysis. He encourages seeking the help of contemporary and ancient orthodox writers, as well as saturating the whole process in prayer. All of this has one goal: to bring out the one full and natural sense of the text.

The means, or key considerations, are the rule of faith—that is, the basics of Christian orthodoxy—the context of the passage, and its comparison with other passages. Analysis or “resolution” means unfolding the passage into its various doctrines. Whether explicit or implicit, these doctrines must be drawn from the genuine meaning of the text. Perhaps the most enduring significance of Perkins’s labor is his emphasis on application—or, as he puts it, “the skill by which the doctrine which has been properly drawn from Scripture is handled in ways which are appropriate to the circumstances of the place and time and to the people in the congregation” (54).

WHY YOU SHOULD READ IT

There are many reasons why pastors today should read The Art of Prophesying. Some I have already mentioned, such as Perkins’ emphasis on Scripture, his rigorous, yet simple, method of its interpretation, and his legacy of faithfulness. Here are few more that I have found uniquely helpful in Perkins’ work.

First, there is great wisdom in Perkins’ practical advice to preachers. He exhorts us to only correct the errors that our congregations are actually threatened by, so as not to create trouble that had not existed. He also urges that the correction of secondary issues be in a friendly manner. A final example of Perkins’ practical guidance is from his insistence on a plain style. He warns about quenching the Spirit through the use of specialized vocabulary, elevated oratory, or Greek references. All these points of instruction are particularly appropriate for those of us in seminary!

Second, Perkins provides an approach for specific and pointed application, which is one of the most difficult aspects of sermon preparation. He breaks the preacher’s audience down into seven categories or spiritual conditions of hearers: ignorant and un-teachable unbelievers, ignorant but teachable unbelievers, knowledgeable but un-humbled unbelievers, humbled unbelievers, believers, backsliders in faith or lifestyle, and mixed congregations of believers and unbelievers. He also draws four varieties of application from 2 Timothy 3:16; teaching and reproof involve informing the mind and recovering it from error, whereas instruction and correction include helping hearers to practically live out their faith in the spheres of family, state, and church so as to move from ungodliness to godliness. Coupled together, these taxonomies create a usable framework for practical application.

Third, Perkins reminds us of the men we must be in order to be effective preachers. I must be a man of prayer, both in preparation for preaching and in the pulpit itself. Further, I must possess holiness of heart and a blameless life. Perkins understands this godliness of the minister to flow from more than biblical understanding, but also “an inward sense and experience of the Word in his heart” (73).

In the context of today’s confusion over preaching, The Art of Prophesying is a welcome reminder of a time-tested approach to evangelical preaching. It was the primary preaching manual in the English-speaking world on both sides of the Atlantic for generations—and for good reason. The perennial issues it addresses makes it surprisingly suited for our own context. The reader almost forgets the work is more than 400 years old. Perkins understood the value of preaching as two-fold: proclaiming and applying the truth. This gathers the elect and drives away the wolves; put differently, it is the means by which God builds his church. Whether one agrees with his particulars or not, this ought to be our vision for preaching even today. Perkins’ offering will at the very least challenge pastors to be relentlessly biblical and to do the hard work of robust application. May Perkins’ closing words express the essence of every preaching ministry today:

“The heart of the matter is this:
Preach one Christ,
by Christ,
to the praise of Christ.


I. THE ART OF PROPHECY

"There are two parts to prophecy: preaching the Word and public prayer. For the prophet (that is, the minister of the Word) has only two duties. One is preaching the Word, and the other is praying to God in the name of the people: 'Having ... prophecy, let us prophesy in proportion to our faith' (Rom. 12:6); 'Restore the man's wife, for he is a prophet, and he will pray for you and you shall live' (Gen. 20:7). Notice that in Scripture the word 'prophecy' is used of prayer as well as of preaching: 'The sons of Asaph, of Heman, and of Jeduthun, who should prophesy with harps, stringed instruments, and cymbals' (1 Chron. 25:1); 'The prophets of Baal called on the name of Baal from morning even till noon ... And when midday was past, they prophesied until the time of the offering of the evening sacrifice . . .' (1 Kings 18:26, 29). Thus every prophet's [ask is to speak partly as the voice of God (in preaching), and partly as the voice of the people (in praying): 'If you take out the precious from the vile, You shall be as My mouth' (Jer. 15:19); 'And Ezra blessed the Lord, the great God. Then all the people answered, "Amen, Amen!"' (Neh. 8:6). 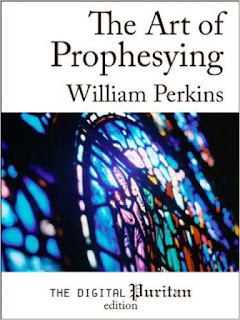 Preaching the Word is prophesying in the name and on behalf of Christ. Through preaching those who hear are called into the state of grace, and preserved in it. God has 'given us the ministry of reconciliation ... Now then, we are ambassadors for Christ, as though God were pleading through us; we implore you on Christ's behalf, be reconciled to God' (2 Cor. 5:18, 20); 'God from the beginning chose you for salvation, through sanctification by the Spirit, and belief in the truth, to which He called you by our gospel' (2 Thess. 2:13, 14); 'The gospel is the power of God to salvation for everyone who believes' (Rom. 1:16); 'Where there is no revelation the people cast off restraint' (Prov. 29:18); 'How then shall they call on Him in whom they have not believed? And how shall they believe in Him of whom they have not heard? And how shall they hear without a preacher?' (Rom. 10:14)." - Extracted from THE ART OF PROPHESYING by WILLIAM PERKINS (1558-1602) first published in Latin 1592 and in English 1606. You can read the whole e-book HERE.

LIFE AND PROSPERITY, DEATH AND DESTRUCTION

In Deuteronomy 30, Moses gives the Bible's first glimpse of the two final destinations of the human race: one leads to life and prosperity, the other to death and destruction. In this session from the 2015 Gospel Coalition National Conference, author and pastor Tim Keller works from Deuteronomy 30 to show our only hope to achieve life and prosperity lies in the gospel.


In this 47-minute session from the 2015 Gospel Coalition National Conference, Tim Keller works from Deuteronomy 30 to show that our only hope to achieve life and prosperity lies in the gospel. Tim is pastor of Redeemer Presbyterian Church in Manhattan. He is co-founder and vice president of The Gospel Coalition and author of numerous books, including The Reason for God  and Center Church. - Right Now Media.